Purina is owned by Cargill, Inc. who proudly offers the Purina extended brand of feeds through its licensed subsidiaries outside the United States, in locations around the world, including Canada.

Today, Purina is one of the highest equity brands in Cargill’s brand portfolio. Produced and sold on three continents in 13 countries, Purina products are available through an extensive Purina dealer distribution network covering nearly 40,000 points of sales worldwide. Each day numerous horse people and horses enjoy the benefits of using Purina feed.

As the global leader in providing the highest quality animal feeds, we use the most professional distribution network to deliver innovative solutions through animal nutrition products, programs, and services.

History of the Purina Brand

The Purina name began as a company brand which offered livestock nutrition and has evolved into a world class brand representing the importance of strong relationships and trust. The strength of this brand and what it stands for helped the former Ralston Purina Company (RPC) become the world’s largest manufacturer of balanced feeds for different animals. Another key contributor to company growth was use of scientific research to improve feed rations and farms throughout North America, South America and other countries of Europe and Asia.

When the company was founded in 1894 by Mr. William H. Danforth, in a forage store near the Mississippi riverfront, in St. Louis Missouri, agriculture was in its infancy. Feeding poultry, dairy cattle, pigs and other animals was not as scientifically based.

The third, fourth and fifth milling facilities had been established in Buffalo, New York, Nashville, Tennessee and Forth Worth, Texas.

A new era began due to the introduction of research laboratories for the feed business. Gradually formula feeds came to represent much more than just a convenience for farmers; they became an economic need and a basic competency requirement.

Purina had opened feed mills in fourteen other cities, from Montreal, Québec, Canada to Lubbock, Texas. A great contributor to Purina’s success has been the development and personal growth of employees. This commitment to partnering with employees, has resulted in very strong spirit of loyalty and engagement.

Danforth’s personal impact on Purina was personified by the 1902 slogan: Purina – Where Purity Is Paramount. That slogan, along with the now familiar Checkerboard logo, struck a strong chord with customers. The Purina® brand plays a special role among dealers and their employees who work closely with the Purina sales force and technical specialists to fulfill customer needs.

Mr. William H. Danforth was a talented businessman who was opening the way to a new industry, but he was also a religious man, with ethical principles setting the example in his own life by practicing the philosophy he preached.

He was not only a first-class salesperson, with great genius for promoting sales, but also demonstrated a strong interest in the personal growth of individuals.

Mr. Danforth and his partners were the first to understand the great value of trademarks and uniform packaging. In a time in which there were practically no uniform packaging, Purina was already sacking their feeds in attractive bright red and white checkerboard sacks.

A family anecdote from Danforth’s childhood was that he recalled a family whose members were always dressed in the same checkerboard-patterned cloth. The checkerboard shirts and dresses quickly identified everyone in the family and Danforth thought the same would happen with his company products.

The Checkerboard has become an icon and the time it has been in use is exceptional stretching from the time in which ads were simply voiced until the present time of television and Internet.

A new era began due to the introduction of research laboratories for the feed business. Gradually formula feeds came to represent much more than just a convenience for farmers; they became an economic need and a basic competency requirement.

Mr. Danforth resigned the presidency of Purina and his son, Donald Danforth took over the business. Donald contributed his talent to consolidating and managing the company, along with a firm confidence in the future of the feed industry as well as that of agriculture.

Under his active leadership, from 1932 to 1956, Purina experienced significant expansion.

What had been a fast-growing business until 1940 became dramatic expansion in the following years.

Purina brand is supported by research laboratories across its geographic service area and research programs are continuously being developed, in collaboration with other institutions. This research is about preparing products and feed plans to help animal owners achieve their goals.

The proud legacy of the Purina brand is clearly the result of the strong leadership of William H. Danforth whose influence lives on through his creed of Four‑Fold Development and philosophies from his book I Dare You. This brand legacy continues today as Cargill employees continue to live up to this philosophy.

The Purina brand has earned the reputation of honoring partnerships built through relationships with employees, dealers, customers and academia. These relationships comprise the Purina Difference, which in turn has evolved into the brand promise of "Partnerships for Extraordinary Success.”

Cargill is an international producer and marketer of food, agricultural, financial and industrial products and services. Founded in 1865, our privately held company employs 142,000 people in 66 countries.

We help customers succeed through collaboration and innovation, and are committed to sharing our global knowledge and experience to help meet economic, environmental and social challenges.

Learn more about Cargill on cargill.com/company/.

Our vision is intended to unite, challenge, and inspire everything we do. By embracing and acting on the following ideas, we will drive Cargill to achieve its vision for the future.

Committed to the Quality of Purina Horse Feed

Thanks to sophisticated new equipment and processes, this leader in the field of equine nutrition is further optimizing the quality and safety of its products. On October 23, the day of the grand opening of this specialized new plant, over 200 guests from Quebec, Ontario and Atlantic provinces gathered on site to participate in the activities organized by the Purina leadership team.

In addition to Purina distributors and associate dealers, guests included many partners and professionals from the equine industry, as well as numerous long-time customers who are true horse lovers. A guided tour of the different stations provided a better understanding of the steps involved in making horse feeds and cat and dog food. The presentation given by Dr. Bruno Marty, Director of Nutrition at Purina, ended the tour on a strong note, by making the connection between the different technologies in use at the plant, and their positive impact on equine health and well-being. In the course of the day, To see the video follow the link!

Canadian show jumping legend Ian Millar expressed his appreciation for the Purina team of experts, as well as for the Purina feeds and supplements which he serves to his own horses daily. "This major investment marks an important step for our company, as it leaves us better prepared to meet the ever-increasing demands of our clients in terms of the quality and safety of the feeds they choose for their horses,” stated Charles Lapointe, President and Managing Director of Purina Canada.

"The grand opening of our specialized plant is a crucial step towards establishing ourselves as the leader in equine feed quality and safety. This ties in perfectly with our constant efforts to offer our customers unique Purina feeds that are of the highest possible quality.” 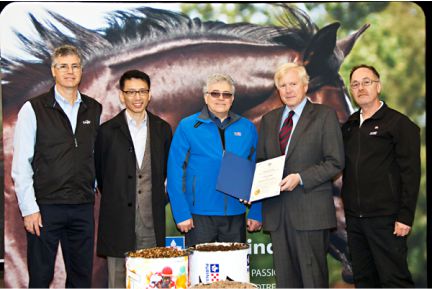